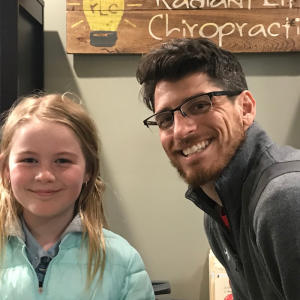 This is one of those amazing stories where faith, hope, prayer and works all come together!

Johanna had colic for the first three months of her life; after that, she seemed to thrive…until about 20 months.

Additionally, Johanna has suffered from severe pain in her joints and limbs since she was two years old. Her Mom reports that she’d wake up in the middle of the night, “screaming, but still asleep. It was awful.” Now, she says, Johanna simply communicates when she has pain in her arms or legs, which is often.

Her ear infections began when she was just under two years old, and the first one was severe. Johanna never showed any symptoms like crying, irritability, or the typical pulling at the ears; she just started stumbling and losing her balance then suddenly spiked a fever.

Her parents say that this has been her typical response since then, along with headaches and dizziness just before the onset of a fever. Additionally, her hearing temporarily suffers, and her parents have to repeat themselves much more than usual. By the time these symptoms arise, the infection is already pretty serious.

At 4 years old, per the advice of her ENT, her parents had tubes put in her ears. They were  hoping that would solve the problem of continual ear infections and fluid behind the eardrums, but the infections continued.

Now, at 9 years old, she’s been on antibiotics three times in the last six months.  The ENT suggested tubes again.  They decided to try chiropractic; it felt like their last hope. Chiropractic is the practice of freeing the nervous system so the body can heal itself.

Friday morning, 15 minutes before the scheduled surgery, Mom asked Johanna’s ENT to check her ears one more time before anesthesia.  They sat there stunned.  Her right ear was almost clear, and her left ear had significantly less pressure!

Sure enough, Johanna’s right ear began draining on its own – enough to warrant canceling the surgery!  Dad texted Dr Andy with the fantastic news right after leaving the doctor’s office. They were so relieved that Johanna didn’t require the surgery!

They came in Friday afternoon to keep working the adjustment so her body can continue working toward proper function of her immune system.